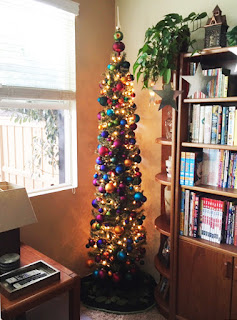 Dear Friends,
This year started innocently enough with my company's annual training convention in Houston. After the convention I stuck around for a few extra days of "management development," in search of a promotion that has yet to materialize. I was still supporting Mayor Pete -- who went on to achieve TikTok fame as Slayer Pete after a series of epic takedowns on Fox News -- and the only Corona being imported was a second-rate Mexican beer. I was auditing in Seattle at the end of February when Patient Zero died there. I was auditing on the California-Mexico border in mid-March when the border closed and California issued its first Stay At Home order. Like many, my company didn't take the virus seriously at first; but that changed as reality set in, and they adjusted the operating rules to allow us to conduct audits 100% remotely -- which I've been doing since the end of March, through a combination of Zoom meetings, FaceTime interviews, and offsite document reviews. I venture out at 6am on Sunday mornings to do my weekly grocery shopping at Ralphs with the over-60 crowd; wear a mask and maintain social distance the way any sane person of any political persuasion should; and otherwise leave the house only to empty my mailbox, which began filling up more slowly this autumn in one of many White House gambits to prevent citizens from voting, or at least to make sure their votes didn't count -- which, when all the legally cast votes were tallied, failed as a campaign strategy. Through it all, I have managed to stay positive and remain negative.
To buoy our spirits, 77-year-old Barry Manilow released "When the Good Times Come Again," a 30-year-old album track that rose to #12 on the Billboard AC Chart, scoring him a sixth decade on the pop charts and invitations to appear everywhere from Rosie O'Donnell to A Capitol Fourth -- all remotely, of course.
As my self-quarantine began, so did Nora's. My eldest cat, now 15, had been suffering from hyperthyroidism, which I was trying to counteract with medication, to no avail. The next recommended level of treatment was radioiodine exposure, which requires three weeks in isolation, which she endured in San Diego in April. Happily, the treatment was successful and Nora's veterinarian is pleased with her lab results.
DNV GL, the company I work for, is a Certification Body, which is accredited by an Accreditation Body, called ANAB. Put another way, auditors get audited. A lot. This year it was my turn, after three years as a fulltime aerospace auditor, to be subjected to an ANAB Witness Audit. Unlike past audits, however, this one was going to be conducted remotely due to COVID, adding an extra layer of difficulty. Luckily, this audit did not include production, which is the most difficult to conduct remotely, and I had visited this client last year, ironically as a Witness for one of DNV GL's new auditors who was the Acting Lead. My weeklong Witness Audit was very stressful, in part because the client's quality management system was in worse shape than I had anticipated, so I kept finding things that I had to write up, despite the remarkable patience they were demonstrating. I have never worked so hard in my life! My reward, in the end, was that my Witness wrote zero findings, a fact that will not be lost during my next performance evaluation.
My Witness Audit landed on my birthday, so between that and COVID and other nonsense, I did not get to celebrate my 61st birthday until two weeks later, when my housemate Kurt treated me to lunch at the Ponte Winery Restaurant in Temecula, which has remained open due to its outdoor seating arrangements.
Autumn was consumed with the election and COVID, about which too much ink has already been spilled. Before we knew it, Thanksgiving was upon us, and with it my first week off since the pandemic began. This break allowed me to finally make headway on my next graphic novel, "Arena Takes Manhattan," a spinoff of my main Jayson strip starring his roommate Arena Stage, which is now completely written, half drawn, and full storyboarded. Needless to say, there have been no in-person comic book conventions this year. But with a vaccine on the horizon, hope springs eternal that conventions will return in 2021, when I plan to debut this long-gestating tribute to career girl comics and to the woman who inspired Arena: the late, great, Andrea Jartman.
Please stay safe while you enjoy the Holiday Season.

Posted by Jeff Krell at 3:16 PM No comments:

Sex and the City 3: Bringing Down the House

Thanks to COVID-19, I have now re-watched the entire 6-season run of HBO’s “Sex and the City,” plus the two movies that continue the story. The series still holds up, for the most part, although the second movie gets a little wobbly.

For years now, there’s been talk of a third movie, and everyone seems to be on board – everyone, that is, except Kim Cattrall, a.k.a. Samantha Jones. She has stated emphatically and at great length, to anyone who will listen, that she has no interest in reprising her role, largely due to her strained relationship with Sarah Jessica Parker, a.k.a. Carrie Bradshaw. When pressed, Cattrall will only offer that she wishes SJP had been “nicer.” Really? Anyone who has worked with SJP will tell you that she is one of the nicest and hardest working people in show business. Anyone who has worked with Cattrall – not so much.

Which brings us to the third movie, which needs to get off the ground before COVID-19 kills us all. Luckily, I have the solution. Fade in:

“Sex and the City 3” opens with an over-the-credits montage in which each of the returning characters receives an invitation from Samantha Jones Public Relations, promoting an open-air event to raise money for Habitat for Humanity. Cut to the dawn of the event, with minions scurrying around putting the final touches on the reception, whose centerpiece is a pasteboard house. As our lead characters enter the scene, a gale-force wind begins to blow, sending hats and skirts, brochures and cocktails flying. The house teeters and crashes onto its side. The wind abates. Guests start flocking to the upended house and buzzing about what they see. Reveal a pair of stylish red shoes, with a pair of feet still in them. As the lead characters make their way to the scene, an off-screen voice shrieks, “WHO KILLED MY SISTER?!!” Reveal Serena Jones, Samantha’s never-before-mentioned sister, as the final credit rolls: AND INTRODUCING JEAN SMART AS SERENA JONES. 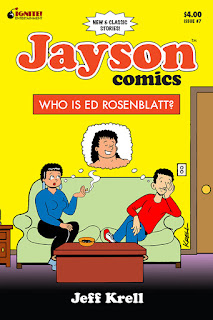 In Jayson Comics #7, a brand-new lead story sets the stage for the return of Ed Rosenblatt, ex-lover of both Jayson and Arena, followed by a retrospective of pivotal Jayson stories that featured the series’ most notorious heartbreaker. 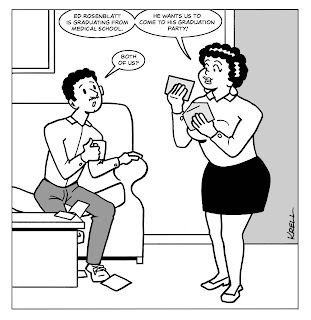 Unlike the main characters in the early Jayson strips, Ed Rosenblatt was not based on a real person. For a while he was the Jenny Piccolo* of the strip, often mentioned but never seen. Andrea Jartman, the inspiration for Arena Stage, did have a sometime boyfriend named Ed, who we agreed was slovenly and obnoxious, and bore no resemblance to the character who finally emerged as Robyn’s discovery and Arena’s high school sweetheart in the pages of Meatmen Vol. 6.

Ed was established as a porn star trying to pay his way through medical school. With the backdrop of the AIDS crisis, he justified his choice as a way to promote safer sex. Then again, over the years Ed has justified many dubious choices: tossing Jayson aside for the allure of Hollywood; knocking up Arena’s sister for the sake of appearances; and returning to medical school when all else failed. With a Jewish father and a Venezuelan mother, the duality of Ed’s nature – Ed Rosenblatt vs. Eduardo Rivera, gay vs. straight, Jew vs. Gentile – was established early on. Blessed with brains, beauty, and charisma, Ed adapts easily to whatever situation he finds himself in – prompting the eternal question, WHO IS ED ROSENBLATT?

Jayson Comics are available for digital download and print-on-demand at IndyPlanet.

Posted by Jeff Krell at 9:38 AM No comments: